I am No Longer at Home Idle 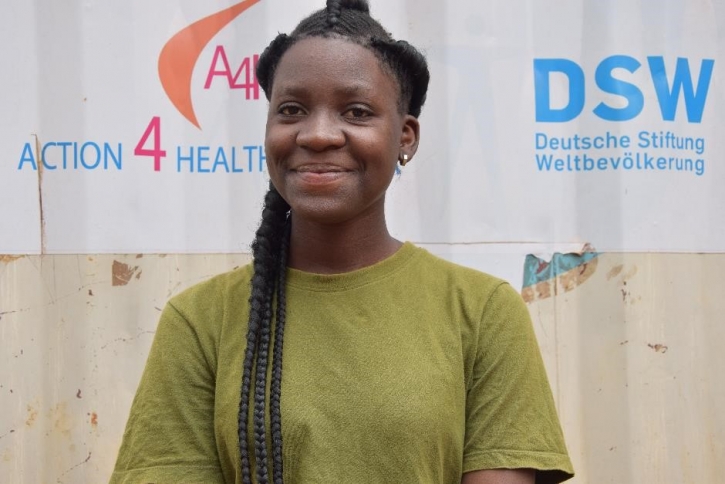 On a sunny Tuesday afternoon at Nabweru Youth Health Club is a group of three girls looking at the computer. Among them is 16-year-old Namuga Vanessa who joined the club in 2016. Vanesa used to spend most of her time at home idle before joining the club.

“Before Joining Nabweru Youth Health Club, I used to be at home idle. I had friends who wanted to take me to those groups that were not useful and would move around the village doing nothing,” Vanessa says.

However, all this changed one moment when she was passing around Nabweru Health Centre III to go buy food. The Health Centre is supported by DSW and Action 4 Health Uganda under the Social Economic Empowerment Project (SEEP) to provide SRH information and youth friendly services to young people in communities.

“When I was passing the health centre, I saw very many young people at the youth centre. Some were dancing, others were on the computer while others were making chalk. I got interested and decided to go ask what happens at the club so that I could also join,” she narrates.

Vanesa notes that when she reached the youth empowerment centre, she met a guy called Araali who she asked how she can join the group.

“When I asked, I was told all I need is to pay a membership of 5,000shs and he explained to me what the club does. I informed him that I will come back the next day. When I came back, I was given a form to fill and paid membership fee of 5,000shs,” she said.

Joining the club helped Vanessa learn a lot of things for instance making chalk, paper bags and how to use a computer.

“When I joined the club, I begun learning how to make chalk and paper bags which I didn’t know. I also begun to learn computer lessons. I never knew how to even start a computer. I couldn’t type or even play a game. Araali kept on teaching me but I also taught myself because of the interest I had,” Vanessa narrated.

Because of this, her life turned around for the better. “I saw my life eventually begin to change and I could no longer be in “bad” groups because one of my friends got arrested for being Idle yet she always wanted me to be like her.”

She shares that ever since she joined the club, she is no longer part of those “bad” peer groups. “I am always busy teaching fellow youths,” she says.

Vanessa further notes that joining the club helped her to get to know about HIV and STIs.

“Before joining the group, I never knew anything about HIV and other STIs. When I got to know about them, I worked with other peers and we began going for outreaches to teach our fellow youths on for instance dangers of drug and substance abuse and encouraged them to come at the club so that they can learn about healthy living lifestyle,” she said.

“I also I got so much confidence and ways to connect with them. I can go out and teach girls of my age on how to avoid unintended pregnancies and how to protect themselves from HIV and other STIs,” Vanessa revealed.

Because of the knowledge and exposure Vanessa got, she intends to mobilise more youth to come join the club so that they can stop vices like drug abuse. “I would love this group to be one that transforms young people who have “failed” in life. I would want to see all of us living responsibly and none of us is caught breaking the law.”

Asked about her plans for the future, she notes, “I would want to become a mid-wife and help women give birth safely.”