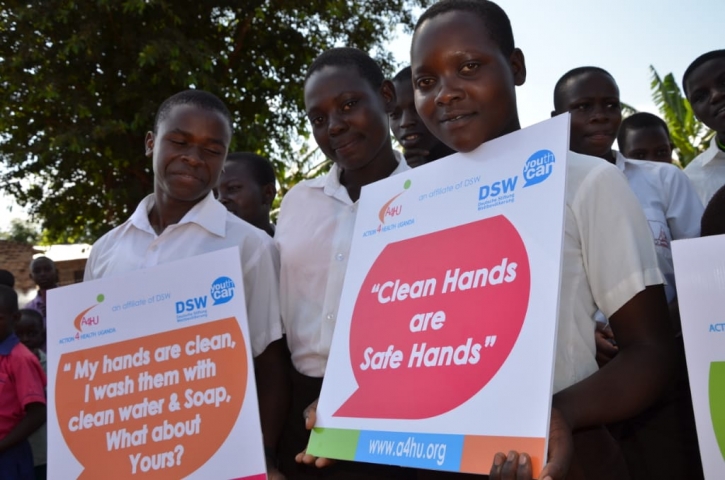 In commemoration of World Water Day, Action 4 Health Uganda (A4HU) with support from the German government and Siemens Stiftung joined the Mityana district local government authorities to hold a festival themed “Good sanitation, my responsibility.” Schools, community leaders and members celebrated the importance of clean water and good hygiene by cleaning Banda sub county trading centre, and committing to support the installation of proper infrastructure for hygiene and sanitation in local schools.

Prior to the event, the Community Health Officer led a mobilization drive in the Youth Truck, using its in-built public address system to call communities in Banda Sub County to attend the festivities.

Just on the outskirts of Banda Trading Centre, we met Hon. Charles Mugenyi, the Mityana district Youth Councillor on his way back from a town clean-up session. He was excited about the drive to clean up his district and couldn’t wait to promote it among the youth that he represents. He said, “I want young people to know that washing hands with soap every after any activity is cool.”

At Soweto Trading Centre in Buzibazi village, after a demonstration of the innovative Sato Pan technology promoted in partnership with the district sanitation department to a small crowd of residents, the area Local Council Chairman, Mr. Vincent Kamoga excitedly affirmed the service. “Until now our village has never been able to properly solve the problem of poorly built latrines which bring constant flies and foul smells, so this innovation is very welcome and I will encourage as many people as possible to get and use it,” he said.

At Buzibazi primary school, we ran into a trio of sanitation champions who are celebrated hand-washing ambassadors at their school. Meet 11 year old Marjorie. She recently won a prize for best hand washer in school. “I help my teachers to show all my friends how to wash hands properly after using the toilet, and before and after eating their food.

Moses is the sanitation prefect at Buzibazi primary school. He says that his friends think that he’s the best prefect ever. “I always tell children to smoke the latrine regularly to keep it smelling fresh,” he says.

Maria just won a prize for being the cleanest girl in school. “I want to say to all my friends, always wash your hands and you will be smart”

Finally at Lusalira landing site in Buzibazi village, an area prone to water borne diseases due to poor hygiene practices, the Sanitation Officer Patrick had a chat with one of the fishermen who expressed concern at the unhygienic practices in his community. He said, “The biggest problem right now is the continued defecation in ‘buveera’ (polythene bags) by community members, which are thrown carelessly on streets.” He advised that for the community to grow into a clean, exemplary society, residents need to change their sanitation behaviour. “The government built some latrines and people need to learn to use them more.”

A4HU in consortium with HRNS and WHAVE Solutions is implementing a three year project named “Improved livelihoods perspectives of young people in rural East Africa” in 5 Sub Counties of Mityana District namely: Malangala, Bbanda, Kalangalo, Maanyi and Bulera. The overall goal of the project is to empower over 50,000 young men and women in aspects of improved health, hygiene behavior, increased income and civic engagement.