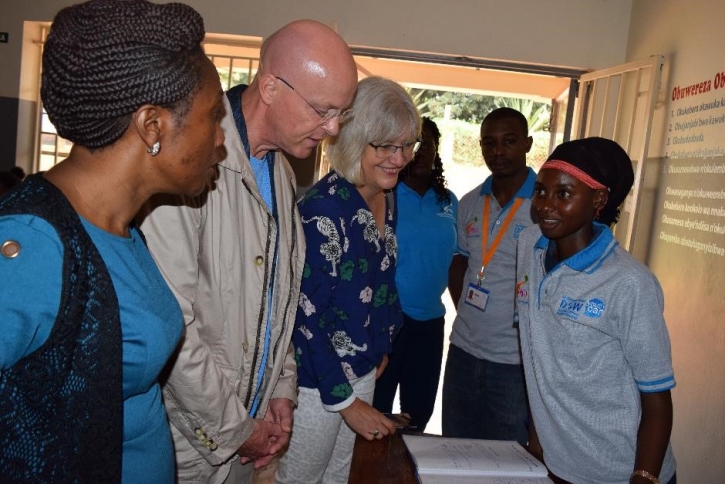 Mr. Henning Wrogemann and Ms. Angela Baehr held a number of meetings with Senior Management and staff to understand A4HU work in regard to serving young people in communities.

The team later paid courtesy call to Nabweru Youth Empowerment Centre which is supported by A4HU in partnership with DSW under the Social Economic Empowerment Project (SEEP) to coordinate peer to peer cascading of SRH information to over 2000 young people in 40 youth clubs in Wakiso, Tororo, Busia, Kampala, and Mukono districts.

The Executive Director met with the Community Development Officer, the In-Charge Nabweru Health Centre III and Nabweru Youth Empowerment Centre club members. The YEC members briefed the ED about some of the challenges they face and how they are engaging and mentoring fellow young people in income generation activities as a pathway to improve access SRH information and services.

During the discussions, it was noted that young people face a number of challenges including, sexually transmitted infections (STIs), unplanned pregnancies, gender based violence, drug and alcohol abuse.

The YEC members acknowledged the support provided by A4HU under SEEP which they noted has helped them not only improve their access to SRH services but also financially through engagement in income generating activities.

“We went through many trainings under this project which enabled me to make good decisions not only about my health but my life in general,” Mariana Nakuya, a peer educator narrated. “

The peer educators were supported to reach young people with sexual and reproductive information and refer them for youth friendly services at the health facilities.

Mariana now talks to her peers about sexual and reproductive health and refers them to Nabweru Health Centre III for services which she is proud of doing because it contributes to the well-being of her community.

Mr. Henning Wrogemann and Ms. Angela Baehr were also in Uganda to acclimatise themselves further with the TeamUp program. This three-year pilot program is a consortium that seeks to bring together three local implementing partners including Action 4 Health Uganda, Hanns R. Neumann Stiftung – Africa and Whave solutions in a multi sectoral intervention that seeks to improve the livelihood prospects of young people in East Africa through Agriculture, Water and Health. The TeamUp program is co – funded by the German Federal Ministry of Economic Cooperation (BMZ), DSW, Hanns R. Neumann Stiftung – International (HRNS) and Siemens Stiftung. The program is piloted in Mityana District in the five sub counties of Bbanda, Bulera, Malangala, Maanyi and Kalangaalo and will target 50.000 young people in school and out of school with a view to scale up on successful completion of the program.